Have a question? Call us! 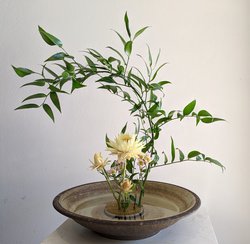 Ikebana is a very interesting Japanese art of arranging flowers that has been used around the world for hundreds of years. What matters the most in ikebana is linearity, which distinguishes it from European compositions in which colours play the leading role. The characteristic feature of ikebana is the arrangement of plants according to strict rules to symbolize heaven, earth and humanity. Ikebana is definitely more than the simple art of flower arranging.

Ikebana - what is it?

Ikebana in Western art is generally defined only as the Japanese art of flower arranging. However, it is worth realizing that such a term does not fully reflect the full nature of this Japanese tradition. It combines natural knowledge, mystical natural world and aesthetic sensibility. The essence of ikebana is not only the material works of floral craftsmanship but also the entire process of their creation. The time spent carefully selecting colors, shapes and sizes is also the time of meditating on the natural cycle of life, the seasons or the passing of time.

The first references to ikebana appear as early as the time of the original Buddhism, around the 7th century AD. It wasn't until the 15th century that ikebana became known as an art form fully independent from this religion. The most important difference between Western art and ikebana is that Japanese compositions are distinguished by their asymmetrical shape, while European compositions rely on symmetry.

How is ikebana created?

Ikebana uses the principle of a scalene triangle which has a distribution of three main lines, so-called dominant lines. The first of the main lines, so-called shin, is the central and longest axis of the floral arrangement. It symbolizes heaven. The second line, soe, symbolizes human life, while the third one, hikae, symbolizes earth. This third line is at the same time the shortest. In creating Japanese ikebana compositions, the most importance is placed on the vertical elements of the construction - we are talking about sticks, twigs, shoots. It is only later that attention is paid to the flowers. This is quite different from European compositions in which flowers are of utmost significance.

Vessels (utsuwa) are also extremely important in composing ikebana. They act as the point of reference for the entire arrangement and should be consistent with it. Depending on the style you choose, vessels can be vertical or flat. The Japanese prefer minimalism, so they usually choose dishes made of porcelain or clay.

Many people associate ikebana with a very old, twisted pine branch, maple leaves, or a dry piece of wood washed ashore by the sea. However, it is good to know that there are actually several types of ikebana. They differ from each other quite a lot, for example, in terms of plant species used for creatiing compositions. The most famous styles of ikebana are:

Seika (another name: shoka) - by far the most used flowers in this style are lilies and roses which are mounted in low vessels or joined bamboo tubes. Flowers, on the other hand, are inserted onto a kenzan;
Rikka - oneof the most classic styles. The most commonly used plants are cypress, cedar and pine twigs. These plants can be combined with bamboo, wild camellia, chrysanthemum, plum, peach or cherry;
Heika- in this style, flowers stand in very long and slender vases, and kenzan is not used. Chrysanthemums, carnations and roses are common characteristics of this style. Irises, asters, tulips or lilies are also often used;
Moribana (another name: piled-up flowers) - this style usually uses gladioli, chrysanthemums, lilies and gerberas.
Several other styles have also appeared recently:

Giant - as the name suggests, this is "larger" ikebana which can be up to 25 meters high;
Kakebana - this is a style in which very elegant compositions are used. Great emphasis is placed on climbing plants and impressive foliage;
Morimoto - in this style, compositions are arranged in small wicker baskets or low bowls. Flowers with small stems and fruits are used;
Jiuybana - an eye-catching style that is distinguished by fanciful compositions. The flowers are dyed, their stems broken or their petals plucked. Feathers, branches and other ornamental objects, even dead insects, are used to arrange compositions;

Ikebana - how to start?

For arranging ikebana, artificial flowers are ideal, providing a whole palette of colours and a variety of shapes. Today, the plastics used to make the plants look exactly like the real thing, and their durability is unparalleled either. Arrange your own composition and enjoy it for years! 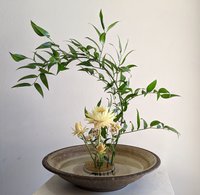 We use cookies to give you the best experience on our website. If you continue without changing your settings, we'll assume that you are happy to receive all cookies on our website.
More information